Three Boston City FC prospects – Jeremy Pachter, Christopher Gilbert and Samuel Deossa – are currently in Brazil, training with the Lions’ sister club’s professional team in the state of Minas Gerais. Here’s the first of a series of diary updates from the traveling trio, opening with defender Jeremy’s account of the journey to South American and their first impressions of this exciting venture. 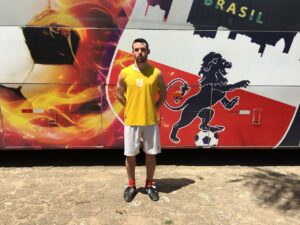 “It was a long journey to Brazil. We left Boston at 7pm on Wednesday and arrived in Manhuaçu at 11.30pm on Thursday. We met all of the guys in the dorms and discovered that everyone is nice and very interested to learn about the USA. We stayed up very late laughing and talking, and then had training in the morning – the thing we’ve been so looking forward to.

It started with a warm-up in the gym with speed ladders, and then we had a very light session because there’s a game tomorrow. The food is very good and there are enough meals to keep us healthy.

The pace of life is very slow here, compared with home, and while we wish we could practice even more during the day, the weather is very hot and humid, so we have to train at the best times and not wear ourselves out. Back home, we’ve become used to high-speed internet, but here’s it’s awful by comparison, particularly when there are too many people on it

We are having a lot of fun and when we’re not training, we’re laughing a lot, hanging out with the guys and talking. Sam and I can communicate pretty well with the players in Portuguese, but we definitely have to get used to the slower-paced days. The sleeping arrangement is pretty tight in the dorms, but we are getting used to it.

Chris and I interviewed with the Boston City FC Brazil media team and they will post it on their website soon.”