Local player and coaching talent Michael Bustamante has been named the new head coach of Boston City FC as the National Premier Soccer League (NPSL) club prepares to kick off the 2019 season.

Bustamante, 29, returns to Boston City FC having been one of the stars of the club’s 2016 inaugural season when he was named to the All-NPSL Team. The Colombian-born midfielder, who was raised in Chelsea, played in every match and was instrumental in helping Boston City reach the playoffs as the team’s second-leading scorer with six goals and joint assists leader with four. 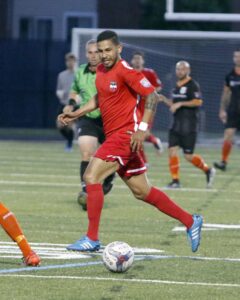 “Having been a player with Boston City and being a local guy who grew up in this area, the opportunity to take the lead and coach this team holds a great appeal,” said Bustamante. “I’ve always been involved in the local community here, so this is an opportunity to help the growth of soccer in Boston and further my coaching career.

“One of the most important things I want to do is bring in quality players to create a little more diversity from different communities in the Boston area. There are a lot of local colleges here in Boston and those are the kind of players who have not played with the club in the past. We will look at our pool of returning players and I am also reaching out to contacts and players I know, to create a strong squad.”

Bustamante was selected in the first round of the 2013 Major League Soccer Supplemental Draft by the New York Red Bulls, where he was a member of the squad that won the MLS Supporters Shield, alongside Thierry Henry and Tim Cahill. He enjoyed a standout college career at Boston University, winning America East Conference rookie of the year honors, having led Chelsea High School to four consecutive playoff berths.

Boston City has also added Manny Brito, who along with returning assistant coaches Roberto Mazzinghy and Cesar Deossa will complete the technical team of local coaches responsible for guiding the club through the 2019 season.

Brito has extensive coaching and playing experience both domestically and abroad. The Cape Verdean native, who is fluent in five languages, has successfully coached at the youth and adult levels in the local region. A long-time educator who is currently teaching Spanish at Shore Country Day School, Brito has a playing resume that has taken him from Europe to Asia as well as the United States.

“I believe my passion for the game and my experience as a player will truly benefit the players at Boston City,” said Brito.  “I was an All-American in college, and I played in Portugal and South Korea, so for those who have ambitions to make it to the next level, I can be an inspiration and help guide them to reach those goals.  Speaking multiple languages and understanding different cultures means that I can bring something to the group in terms of bringing everyone together.  One of my strengths is my ability to connect with the players and establish a good rapport with them so they give everything for the coaching staff in return.

“Another attraction of joining Boston City is the opportunity to work with a group of talented adults.  My coaching has been mostly at the youth level and I truly enjoy what I do, but I am keen to expand my coaching horizons and work with a diverse group of players.”

Boston City FC Managing Director Craig Tornberg said: “I could not be more excited that Michael has agreed to lead our team into the 2019 campaign. He is incredibly competitive and was influential in every match he played for Boston City. We are confident he will make an immediate impact on the team. With Manny, we gain so much from his vast international experience and teaching skills. His presence in the locker room and on the field will only strengthen Michael’s role.

“Michael, Manny and our returning coaches Roberto and Cesar are also so very well-known and respected within the Greater Boston area and beyond. They have strong connections throughout this region’s soccer scene, which we believe will help create even more opportunities for talented local players to further their careers with Boston City FC.”

Bustamante becomes the second head coach in Boston City FC history, following former Brazil international Palhinha, who guided the Lions to the NPSL playoffs in 2016 and 2017, parting with the Lions after the 2018 campaign.

Season tickets for seven NPSL home matches and one special event are now available at www.BostonCityFC.com with prices frozen for the fourth straight season. Boston City FC will kick off the club’s 2019 NPSL home schedule on Saturday, May 4, at Harry Della Russo Stadium in Revere. Five home matches will be played in Revere and two will take place at Hormel Stadium in Medford. The club’s Boston City II development team plays in the Bay State Soccer League (BSSL).